NEW ORLEANS, Aug. 17, 2015 – The newest subdivision in New Orleans is located on the site of the former Turnbull Bakery facility in the historic Irish Channel neighborhood. Elizabeth Turnbull was the CEO and President of Turnbull Bakeries, Inc. from 1981 until she passed away in 2010. “I did not have the opportunity to meet Mrs. Turnbull,” says Nicole Webre, who purchased the property in July, “however, she has been described to me as a strong and sharp businesswoman who was a force to be reckoned with.” Under her leadership, Turnbull Bakery of New Orleans grew from a shotgun double in 1947 to more than 70,000 square foot facility and occupied over half of a city block. Once the premier producer in the nation, Turnbull Bakeries of Louisiana, Inc. was known for its iconic Melba toast and garlic rounds.

The property has taken on a new life under the ownership and development of Nicole Webre, CEO of Livewell Properties, LLC and President of Webre Consulting, a government relations consulting firm. She is developing the site into a residential subdivision with fifteen single family houses and residential lots. Earlier this year the project received unanimous demolition approval and approvals from city planning and city council to re-zone and subdivide the lots for single family houses. Demolition of the structure is completed with site preparation to begin for construction of the first set of houses. House plans, buying options, and more information are available on the website www.BakeryvillageNOLA.com.

Webre hopes to carry on Elizabeth Turnbull’s legacy by using her urban planning and zoning expertise to contribute to the Irish Channel community. “It’s a bittersweet ending, and yet an exciting new beginning,” says Webre, “the redevelopment will allow more families to enjoy this burgeoning historic community.” Similar to Turnbull’s commitment to the area, Webre has been working with the community every step of the way, and locals have expressed a demand for residential development. Many people have reached out to her to retell fond memories of Mrs. Turnbull and growing up in the Irish Channel. Historically, the Irish Channel has been a diverse neighborhood of working class Irish, Germans, Italians, and free people of color, a hub of trade and culture important to the city of New Orleans. Bakery Village, named after its predecessor, will carry on the legacy that began on the square more than 60 years ago. 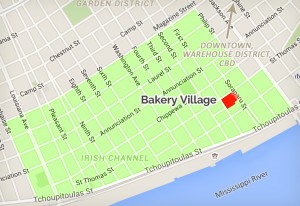